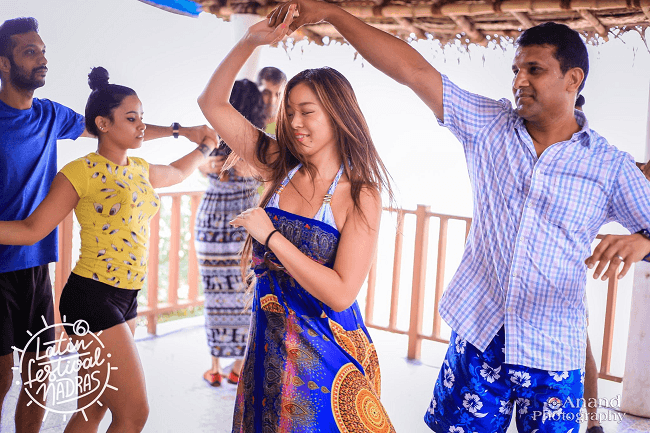 In this ninth edition of the festival, you will also find carefully designed Salsa, Bachata, and Kizomba workshops, special training camps with instructors with more than a decade of teaching experience at festivals around the world, performances by national and international dancers (Korea, Japan, Malaysia, Canada, Vietnam, China, and Russia) acclaimed worldwide, also social dancing in the company of the seven best DJs from Asia, pool party, theme parties, surfing, buffet lunches, and dinners with a luxury stay that characterizes this event as the only one of its kind in Madras, currently known as the Chennai city, capital of the Tamil Nadu state.

Friday, September 2nd will be the opening of the Latin Festival Madras https://www.latinfestivalmadras.in/ at Surf Turf beach, where you can dance all day long with delicious local food, and if you prefer a little more excitement you can surf in the Bay of Bengal with your fellow dancers. But, if you don’t know this sports discipline, don’t worry because there will be instructors on-site to perform this water sport with the correct technique. 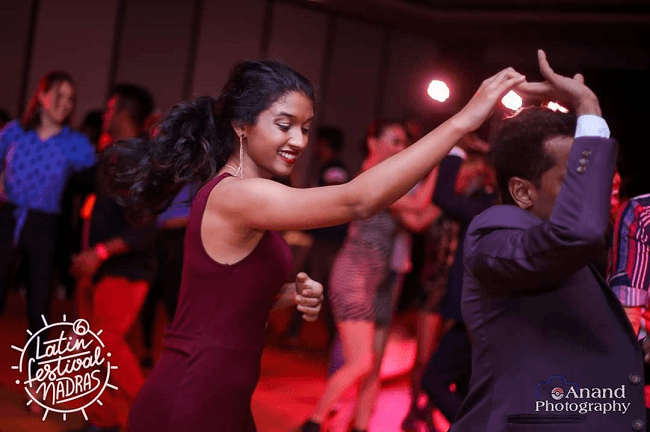 7 DJs will participate in this Latin event from Malaysia, Japan, Canada, Thailand, and India.

On Saturday, September 3rd, and Sunday, September 4th, all the activities (workshops, camps, shows, and parties) will take place at the Taj Vivanta hotel, a five-star venue to have a luxurious, memorable, and family experience.

Two of the peculiarities of this Festival are the parties before to the Latin event (August 29th – September 1st) and the getaway after the closing of the festival (September 5th – September 6th). The event’s organizers have planned to visit Pondicherry through Mahabalipuram for two days, the latter place a UNESCO World Heritage Site.

In Pondicherry they will be able to taste the typical dishes, dance, and do a guided exploration of the ruins and historical sites of the town.

On the second day, you will explore the old Franco-Tamil city. During the day they will visit the old Auroville community located 10 km from Pondicherry and during the night they will dance at the pool party at Anandha Inn Convention Center and Suites. And on Wednesday, September 7th, will be the big farewell to Chennai.

But, before leaving the city of Chennai, we must talk about the live music that will be present at this Latin event in India. The greatest exponents of the Trombone and the Timbal will say here, the maestro Jimmy Bosch and the creator of the hard Salsa orchestra Tromboranga, Joaquín Arteaga. 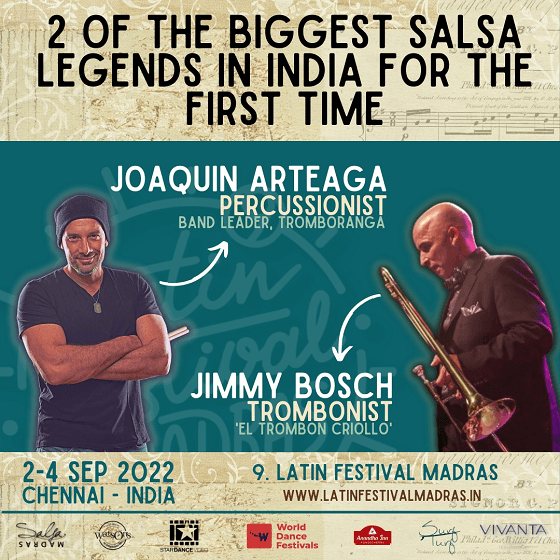 The objective of this festival is to provide a memorable experience and exposure to the educational value for future talents, artists, and instructors.

Jimmy Bosch is an exceptional Latin Music Trombonist acclaimed in more than 70 countries and has 11 Grammy Awards and more than 100 recordings in the Salsa and Latin Jazz genres. “El Trombonista Criollo” has worked with the FANIA All-stars, Eddie Palmieri, Ruben Blades, Ray Barretto, Machito, Cachao, and more. He has participated in Salsa conventions and Latin and Jazz music festivals around the world, as well as performed in clubs in Asia, Europe, America, and Oceania.

On the other hand, the second artist to perform on this special evening is the Leader, Director, and Timbalero of the Tromboranga salsa orchestra, Joaquín Arteaga. This Venezuelan timbalero based in Barcelona (Spain) has been part of the Gerardo Rosales Orchestra (2004) and has toured Europe accompanying international artists such as Andy Montañez, Andrés Cepeda, Jhon Lozano, Venezuelan Masters Orchestra, and Bloque 53, among many others.

Since 2009 he has been a sponsor of the prestigious Latin Percussion LP brand. Joaquín has produced and recorded nine albums for Tromboranga and has toured extensively throughout Latin America, North America, Europe, Australia, and Asia. This Venezuelan composer has also organized and taught salsa percussion workshops in Spain, Japan, Australia, Colombia, the USA, France, the UK, Morocco, Lebanon, Thailand, and South Africa, among many other countries.

The Full Passes for the event are USD 140 (travel to Pondicherry and Mahabalipuram is not included). The online sale ends on August 31st, and the prices of the passes increase every two months.