Joseito was a consecrated Dominican merenguero who began his career in the 1930’s, better known as “El rey del merengue, El diablo Mateo”.

As a child he learned to sing and dance. He sang at the “Fiestas de la cruz” and at wakes, since at that time the deceased were prayed to with songs.

Mateo began his career as a singer during the 30’s, a period in which he was gaining the public’s favor.

Some time later he was requested by the record label “SEECO” to join the cast that in Havana would record with the Sonora Matancera.

Those were the years of the Trujillo Era in which Dominicans required an exit permit to travel abroad.

At first, this document was denied to Joseito.

He was born on April 6, 1920 in Santo Domingo (Dominican Republic).

In one of his later trips, he decided to stay in Cuba to sing in CMQ, together with Celia Cruz and La Sonora Matancera, a very popular group at that time.

After the assassination of Rafael Trujillo on May 30, 1961 and the end of his dictatorship, Joseito decided to try his luck in Puerto Rico.

In 1962, Joseíto participated as vocalist in the first tour of the “Gran Combo” to Panama, to promote the album ‘El Gran Combo con Joseíto Mateo’. 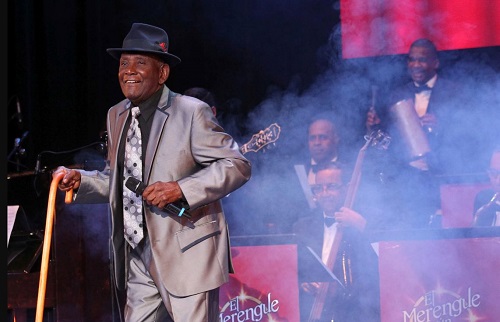 There he met the young singers Pellín Rodríguez and Andy Montañez, who ended up replacing him in the Puerto Rican group.

“El Gran Combo was very good to me, I adapted to sing plena, bomba, guaracha, boleros, but then I had to return to Santo Domingo to clear my name.

They were falling behind all those who were with Trujillo, and in the Republic they said I was a spy and was on the run”.

Mateo’s professional work has spanned more than 70 years and constitutes an important reference of the Dominican musical culture.

He was nourished by the roots of merengue and became a singular exponent of it. His innovative style was characterized by a stage participation enriched by his particular way of dancing and singing.

Some of his best known songs are Madame Chuchí, Dame la visa, La cotorra de Rosa and La patrulla, among others. Joseito is known as “El Rey del Merengue” (The King of Merengue).

On November 11, 2010, Mateo was recognized at the 11th Latin Grammy Awards with the Latin Recording Academy’s Musical Excellence Award for his contributions to Latin music.

Joseíto Mateo passed away on June 1, 2018 at the age of 98, due to leukemia. He spent his last days in the Hospital de las Fuerzas Armadas.