Milano Latin Festival opens its doors at 5:30 PM, and concerts start at 9:30 PM

The most important annual festival of the summer in northern Italy dedicated to celebrating Latin American culture will continue bringing Salsera fun to the 190,000 visitors of the Foro Mediolanum in the town of Assago located in ASSAGO Viale Milano Fiori parking Metropolitan 20100 Assago, Lombardy, Italy.

Milano Latin Festival founded almost a decade ago (2013), maintains the format of its beginnings with concerts by artists with a trajectory in tropical genres, urban rhythms, and traditional music, tasting of Latin American cuisine, art exhibition, and sale of crafts with a wide variety of Natural ethnic products for health and nutrition with organic and fair trade. Likewise, you can find the Salone Delle Nazioni (Nations Hall), especially for Diplomatic Missions of Latin America, organizations, and institutions.

This reopening that began on June 9th and will end on August 16th puts the magnifying glass on the public that loves Latin dances, residents, tourists, experts, connoisseurs, or simply curious about Latin rhythms after two years of cessation due to the Covid-19 pandemic. 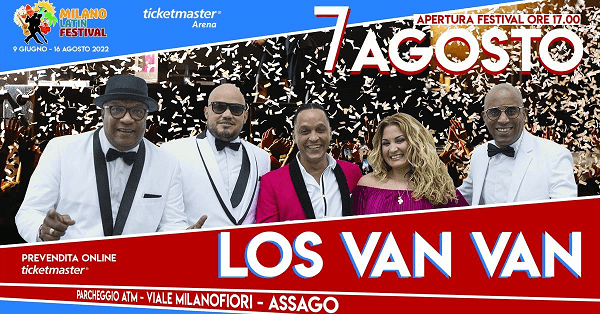 The Van Van derives their name from the jargon of the cane collectors to say Come on, Come on.

This prolific Cuban orchestra is still in force with its peculiar sound. “Their texts are considered by many to be true chronicles of Cuban society. They have an extensive recording career with more than 40 albums, many of them nominated and awarded. They obtained a Grammy (2000) with the production “Permiso que llegó Van Van” and were nominated with the album “Fantasia”, a tribute to Juan Formell in 2017”. Fragment extracted from the Milano Latin Festival website. https://www.milanolatinfestival.it/

For the Salone Delle Nazioni program, there will be a rich calendar of cultural events on the occasion of paying tribute to the various countries with the celebration of their national holidays. This tribute begins with the Day dedicated to the second generation: A challenge for everyone! (July 1st). During this celebration, there will be reflections and testimonies of the “New Italians” with themes inspired by the encyclicals of Pope Francisco, Laudato Si, and Fratelli Tutti. In the same way, this tribute to each country will continue with Los Kunas de Panamá (July 4th), the national day of the Bolivarian Republic of Venezuela (July 5th), and then there will be the pictographic exhibition of the Environment in tribute to the Holy Father Pope Francis from July 6th to 8th. The celebration of the national days of Argentina, Peru, Colombia, Cuba, El Salvador, and Bolivia will continue.

So, July is the best month to vacation in Milan thanks to the most complete Festival that celebrates Latin American culture with more than five honored countries, concerts by internationally renowned artists, dance schools with great instructors, performances by folk groups and DJs, exhibitions photo booths, ethnic restaurants, and a street food area, musical plazas, cocktail bars, and a concert area. Milano Latin Festival is the largest three-month event celebrating Latin American culture in Italy.