The eldest of three brothers, he was from a very young age an enthusiast of dancing, music and singing.

He was a brilliant Sonero of outstanding participation with “La Sonora Matancera”, Orquesta de Javier Vásquez, “Orquesta Harlow”, and his own group, which he founded in Mexico after settling in this country.

He gave as much luster to his small homeland as to the big one: in the 70’s he was the singer of the famous “Sonora Matancera”, the pioneer of the Cuban ensembles.

At the end of the 50’s he organized together with three other coterráneos, Juan Luis Cobo, Manolito Santos, and Rolando (Rolo, E.P.D.) González, a quartet called “The Fraterns” (Los Fraternos), in the style of the American school of famous quartets like “The Platters”, “The Drifters”, “Frankie Lymon and the Teenagers”, and others that marked a guideline in the history of “Rock and Roll” and the so-called “Doo Wop”, which is a choral sound characteristic of these groups of the decades of the 50s and 60s.

Around 1958, the group appeared in the well-known José Antonio Alonso’s program of the then powerful Cuban television, which was a continuity of “La Corte Suprema del Arte” of the Cuban radio, initiated in 1938, from where great figures of the Cuban music came out. Substantial changes took place in our country and soon after “Rock and Roll”, at least in Cuba, fell into silence.

Wuelfo left Cuba in mid-1961. I did not see him again (although I always knew about him through his brothers Juan and Gabriel) until 1979, when he returned to visit his native land.

Always with the same sympathy and friendly and popular simplicity that characterized him.

At that time he had already been with “La Sonora Matancera”; the great singer Roberto Torres, “El Güinero Mayor”, who was leaving his place in the Sonora to form his own group, introduced him to the director Rogelio Martinez, who accepted him immediately.

He remained with La Sonora from 1973 to 1976, with which he visited the U.S.A., Mexico and most of Latin America. He recorded, among sones and guarachas, 20 numbers of diverse musical authors, among them: “Anacaona”, by Tite Curet Alonso; “A Burujón Puñao”, by José Carbó Menéndez; “Así Se Compone Un Son”, by Ismael Miranda; “Muñeco Viajero”, by Carlos and Mario Rigual; and “El Chivo”, by our late compoblano Vinicio Gonzaléz, one of our santiagueras glories, among other authors.

When he left La Sonora due to disagreements with Don Rogelio, he settled definitively in Mexico, which became his second homeland.

In Mexico City he formed his own group, which he named “Sonora Las Vegas”, alluding to the person who made him known as a singer and gave him celebrity, and to his hometown, therefore Las Vegas.

He began to be called “Mister Salsa” working in radio, television and cabarets. He loved Mexico very much; in an interview he said: “because the people are tasty and because I feel at home here”. 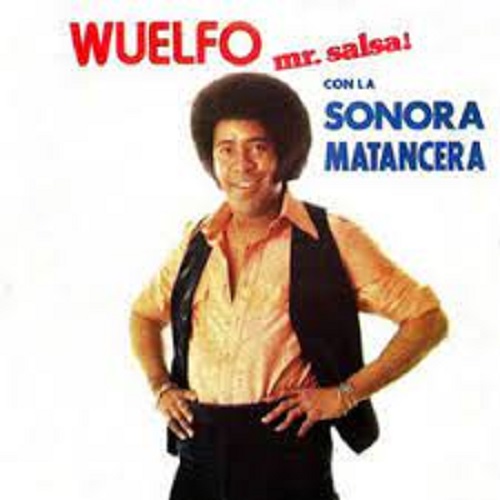 In Mexico he married Miss Araceli Zoreda Pérez, from whose marriage there were no children; the union was interrupted by Araceli’s death several years later.

The year 1989 marked the 65th anniversary of the founding of “La Tuna Liberal”, among other names, which achieved notoriety in Cuba and internationally under the name of Sonora Matancera. So that this date would not be overlooked, the notable Puerto Rican journalist, broadcaster and producer Gilda Mirós had the happy initiative to gather all the singers alive at that time who had left their art with La Sonora Matancera.

In July 1995 I met my friend again, when Wuelfo arrived from Mexico invited to the celebration of our patron saint, Santiago Apostle, in the halls of the former Radisson Hotel in Miami. Among those present sang Amado Herrera (Maninito), José Antonio García (Chamaco), and Wuelfo. All the santiagueros present recognized our values; among them were Wuelfo Sr. and other close relatives.

I did not see him again until 1999, when a group of santiagueros friends welcomed him to Miami, where he intended to settle down. It was not possible.

He had spoken to me about sending me his recordings with the idea of getting them to some radio stations so that they would know him, and in turn, to some places where records were sold to see if I would have the opportunity to play his recordings, among them the 14 LPs he had recorded and possibly his last recording, a CD called “Wuelfo Cumbia Del Gato Volador”, which he kindly sent me from Mexico.

He spent long periods of time in Veracruz, where he felt at home and his performances were strongly applauded. To such an extent that the government of the state of Veracruz, in November 2003, offered him a just tribute in the framework of the Festival del Son (first photo, above right). On that occasion he performed with his “Sonora Las Vegas” at the La Reforma Theater and the Atarazanas Cultural Center.

Like many other singers, he dreamed of spending the rest of his life singing; he wanted to die on the stage. Apparently an oversight in his health was complicated by prostate cancer. We would talk on the phone from time to time and he would show me that he was very optimistic, but he was not. In 2004 he underwent intensive treatment at the Oncology Hospital of the Centro Medico Nacional Siglo XXI in Mexico City, but the initial illness led to pulmonary complications which in turn caused a stroke that took his life on May 31, 2005. 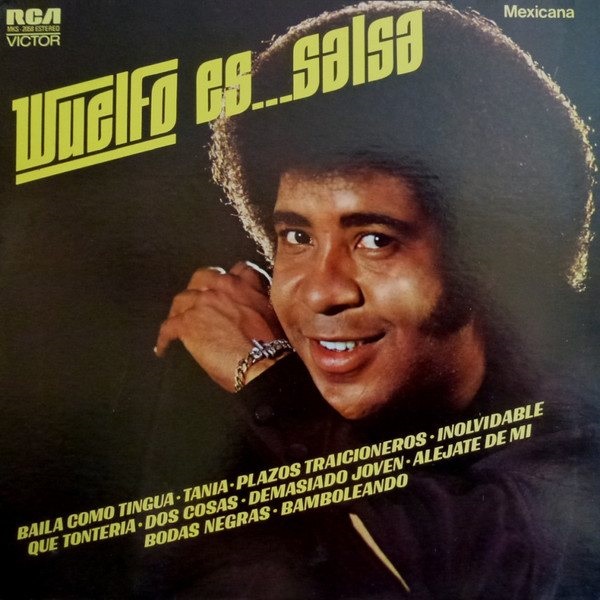 According to a friend who assisted him until the last hour, it was very sad to see how his life was passing away.

The Sindicato Único de Trabajadores de la Música had been carrying out activities to collect funds to help him financially.

It seems to me very fair to remember this value of ours six years after his departure, remaining in our local history along with other celebrities that also in due time it will be necessary to give them the merit they deserve, not only for future generations to know them, but at present there are coterráneos that for lack of the required information, and against our will, do not know anything about them.

This small biography is not even remotely all that can be known and said of Wuelfo, because there are stages unknown by the writer, who urges those who know and wish, to make their contribution to know much more of our singer friend, who had the honor of going down in posterity, perhaps without him thinking about it, for having sung with that great musical group that was and is La Sonora Matancera.

This work would not have been possible if he had not had the help of Dr. Héctor Ramírez Bedoya. Héctor Ramírez Bedoya, Colombian anesthesiologist who helps many to mitigate their ills through surgery in his native Medellín, but who as a musicographer, and from the presidency of the Corporación Club Sonora Matancera de Antioquia, has had the merit of having written the “Historia de la Sonora Matancera y sus Estrellas”, a book of the same title published in 1996, which is considered the greatest work ever written about the dean of the Cuban ensembles.