Finalists in the 23rd edition of the Latino Book Awards, October 2021.

In Puerto Rico this past September 17, 2021, Bella Martinez announced that two of the publications produced in 2020 under the imprint ‘Be more by BME’ are in the finals of the International Latino Book Awards, the most important award for Latino cultural focus in the United States.  The awards ceremony for the 23rd edition of the International Latino Book Awards will be held on October 16 and 17, 2021.  It will be virtual via www.LatinoBookAwards.org.  Finalists are from the United States, Puerto Rico, and 19 other countries.

The awards are produced by Empowering Latino Futures (ELF), a non-profit organization established in 1997 by Edward James Olmos and Kirk Whisler. Other ELF programs include the Latino Book and Family Festival. The International Society of Latino Authors.

‘Education Begins in the Home’ has provided books to more than 155,000 young readers. 182,000 students have utilized the Latino and American Indian Scholarship Directory. More than 80 episodes of the Latino Reads Podcast have aired. ELF programs have reached more than one million people. 350 volunteers annually donate more than 14,000 hours of service.

Both books are available through the links below: Ray Barretto, Giant Force or A Conguero’s Conguero, A Memoir of Jimmie Morales as told to Bella Martinez.

Since 2016, ‘Be more by BME’ has been offering solutions focused on cultural dissemination through literature.

‘Be more by BME’, A Conguero’s Conguero, and Ray Barretto, Giant Force are trademarks of ”Be more by BME’ in the U.S. and other countries.

The names and brands of the companies and products mentioned herein are trademarks of their respective owners.

For more information, press only:

For more information about the books:

Bella Martínez was born in Puerto Rico. She is a graduate of Natural Sciences from the University of Puerto Rico, Rio Piedras Campus.

She lived in the state of North Dakota as a member of the United States Air Force. She completed her master’s degree in Health Services Administration and Quantitative Methods at Central Michigan University, Mount Pleasant, Michigan.

In 2016 she published Schizophrenic: Imaginary Episodes of a Different Life. In 2020 she wrote Insurrecta: Schizophrenic Chronicles of an Untamed Life from Scriba Editions NYC.

She maintains contact with her followers through the blog La Vida es Bella, atrévete a vivirla. Her mission is to inspire Spanish-speaking people around the world to live life to the fullest. Her writings have been published in several international literary anthologies, among them: Divina, la Mujer en veinte voces by Ediciones Scriba NYC -awarded at the International Latino Book Awards 2019, in Los Angeles, California- and in several editions of the poetry collection Siglema 575, of minimalist poetry, Ediciones Scriba NYC.

Jimmie Morales a conguero for the history of Afro-Caribbean music 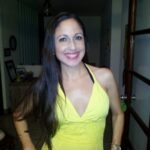