Why is he called Danilo?

We will start a conversation with bandleader, percussionist, and singer Roger Danilo Páiz Pérez. Pleased to meet you, how are you doing?

I’m fine thanks, Karina. Sitting here and ready to be interviewed by your magazine. I have a lot of information about what has happened in my life being a musician here in the Bay Area since the 70’s. 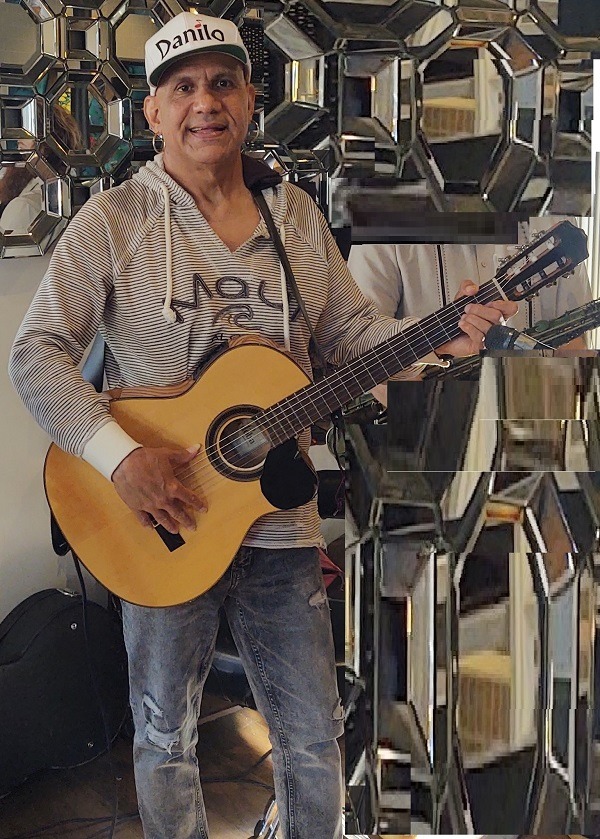 Danilo on guitar at one of his frequent restaurant performances

You are Francisco Pancho Perez’s grandson. Did your grandfather serve as inspiration for the path you would take in music?

Definitely he did. I remember being about four or five years old when I used to hear my grandfather play with his big band, which was composed of 15 or 14 musicians. I always listened to them practicing in our house and started dancing, so my grandfather used to call me cha cha chá. It was a great inspiration for me.

He played music similar to American jazz, and that’s where the inspiration for the music I play today comes from. The salsa that I write is inspired precisely by that kind of jazz.

Where does the name Danilo come from? Also, why is your orchestra called Danilo Y Su Orquesta Universal?

I have to make it clear that Danilo is my middle name since I was born. This is not a nickname as many believe. Some people even think that I have changed my name, but I didn’t. Roger Danilo Páiz Perez has always been my name.

Everyone called me Roger Páiz in the past, that is to say, people called me by my first and last name. In fact, when I played with Rubén Blades in 1989, the album we recorded has me in the credits as Roger Páiz. But when I founded my own orchestra in the 1990s, I thought Danilo was better suited to Latin music, so I started using my middle name to call my orchestra Danilo Y Su Orquesta Universal.

The word universal comes from the fact that I am a Buddhist. I practice the religion of Nichiren Daishonin (monk in Buddhism from Japan in the 13th century and founder of the branch of Nichiren Buddhism) for more than 30 years. That word is widely used in the Buddhist scriptures, and I am very involved in that. 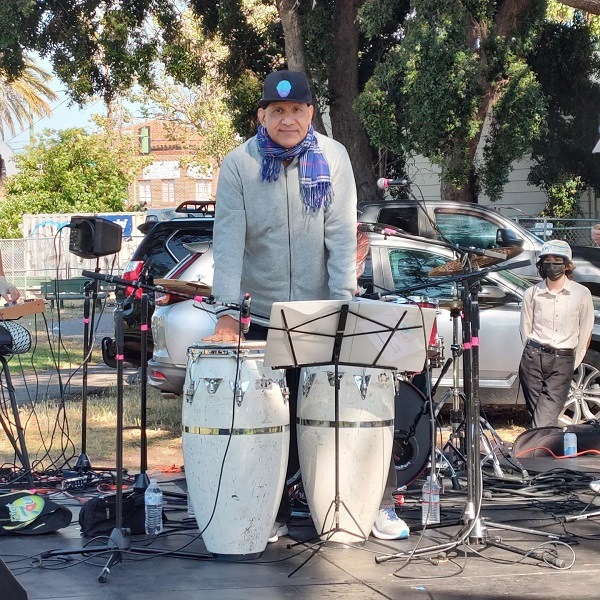 Roger Páiz getting ready to hit with Josh Jones’ band

Your country of origin is Nicaragua. Is Nicaraguan salsa similar to Californian salsa? Are they different? Do you combine them?

Since I was very young, I listened to a lot of Cuban orchestras. I remember my dad tuning in to Celia Cruz, La Sonora Matanzera, among others. From that experience, I picked up all those things since childhood.

Here in the United States, the style was much more modernized. However, I grew up listening to El Gran Combo de Puerto Rico and many other orchestras in the ‘60s and ‘70s. My biggest inspirations were Héctor Lavoe, Oscar De León, Rafael de Jesús, Cheo Feliciano and many others from those years. I paid a lot of attention to how they sang and the melodies that they used.

What Danilo has learned from his musical references

You have made contact with Latin music stars such as Ray Barretto, Rubén Blades, Benny Velarde Y Su Super Combo, Andy Narell, Ray Obiedo, Cheo Feliciano, Oscar De León and many others. What did you learn from all these musical references?

For example, I shared a gig with Cheo Feliciano in Puerto Rico while I was with Rubén at a concert. (Luis Enrique was actually at that concert as well.) Cheo taught me how to phrase with the clave, since this is a very important detail in singing Salsa.

In the case of Héctor Lavoe, I learned a lot from the melodic part. When he sang, the melody was very interesting and appealed to me a lot.

Another singer I liked a lot was Rafael de Jesús, because his style tended to sound like jazz. Sometimes he sang some lines that sounded very jazzy, but he never lost his style as a Salsa singer. That’s one of the main things I liked about him.

Another singer I liked a lot was Rafael de Jesús because his style tended to sound like jazz. Sometimes he sang some lines that sounded very jazzy, but he never lost his condition as a salsa singer. That’s one of the main things I liked about him. 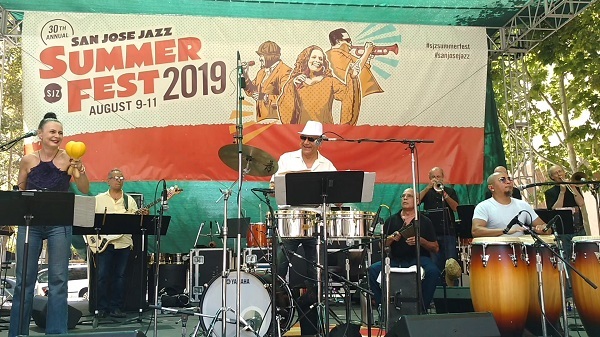 Did he receive academic training in music?

I took classes  in Oakland, California, learning music theory, piano, singing, and much more. These studies helped me a lot to better prepare myself musically speaking.

Studying music is important because it enhances the way you perform, sing, and play on stage. That’s when people can tell whether you are a musician who has studied and analyzed music. I’ve met musicians who learned everything by ear and they never progress to the next level.

Of course, there were also things I learned on the stage, in the studio and in rehearsals. I’ve unified all this knowledge to do my job to the best of my ability.

I saw that you have some dates to perform in the Bay Area and other places, can you tell us a little bit about that?

In 1995, I got the opportunity to take a group to Singapore (to be the house band at the Hyatt Regency Hotel). What I did was to find the best six musicians who could play the music I was asked to play. We rehearsed, traveled to Singapore, and stayed there about three months, all expenses paid. It was an amazing experience and I was honored to present my music in that country. 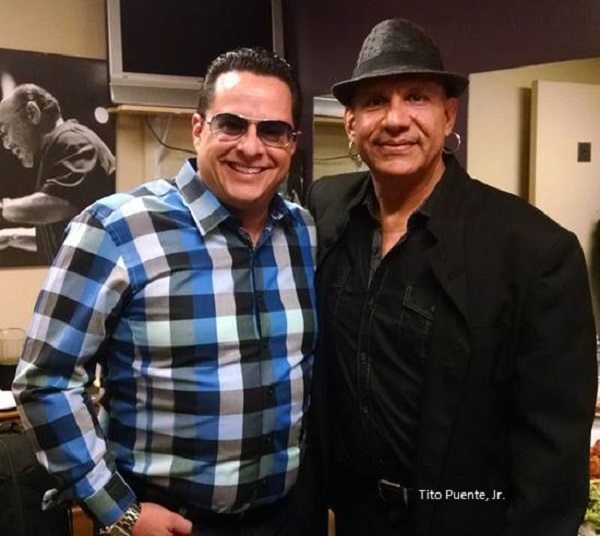 What about your current performances?

We just played at La Peña here in Berkeley. It was really good, a lot of people showed up there and they recorded the whole show. Fans sent me some videos as well, so I have to start editing them.

We also played at The Ramp, El Rio, The Turf Club, Kimbara, among others. Coming up, we will be playing at the Cigar Bar.

I decided to call this album Perseverando because of my experience of overcoming the difficulties of maintaining a music career.

Turning to Buddhism, the word perseverando is very important, because life puts barriers in your way and you have to persevere to overcome them. It was common for record labels to say that they were saturated and couldn’t sign me, but I kept writing and recording original music despite the difficulties. The first album is called Vivencias and the second one is called Avanzando. They are titles that have had a lot to do with my life experiences.

I made a video for one of the songs on this álbum, Rumberos de la Bahia, which is on YouTube: https://youtu.be/z3E7K_5SLJo

What other projects do you have pending?

I’m thinking about putting out an album that will be a combination of songs that have not been released yet with some remixes of songs on my albums. Although a dream of mine is to be nominated for a Grammy, that is not why I créate music. Music is my life and my passion. 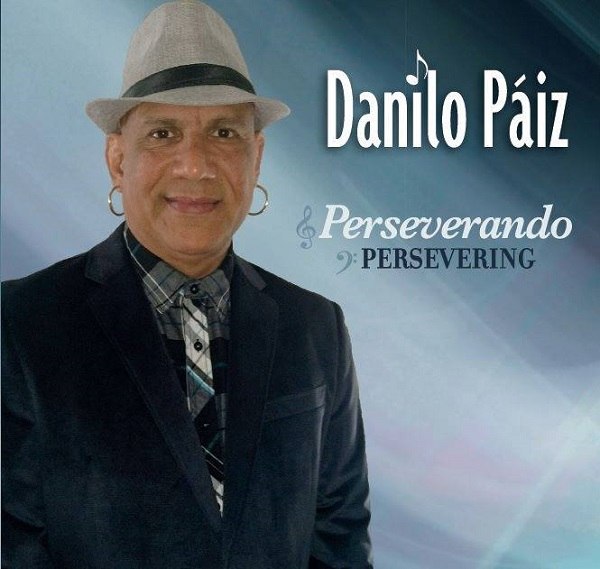 Cover of the album Perseverando