France, Norway, the Netherlands, and the United States will be some countries that will dance to the rhythm of Salsa Dura

With the solid and unmistakable sound of the trombone & percussion sections and the strong influence on Salsa from the 60s and 70s, Tromboranga with their Hot Salsa will visit France (Festival Corazón Latino 2022 – Bordeaux), Norway (featuring the trombonist, Jimmy Bosch at Kafe Sync – Oslo), the Netherlands (Summer Breeze Latin Night 2022 – Amsterdam), Spain (Pamplona and Barcelona), the United States (The Great Colombian Festival Miramar – Florida), and Ecuador (Guayaquil ) with its World Tour 2022 from May to September.

The friendly musicians residing in Barcelona (Spain) will offer a series of performances to captivate Latin audiences in Europe and America to celebrate their tenth anniversary on the music scene.

Te voy a contar has the participation of the Jazz and Salsa master, the trombonist Jimmy Bosch in the song Te perdono. Oscar Hernández (the Spanish Harlem Orchestra leader and winner of several Grammy awards) arranged the Latin Jazz theme, Sal de la Cueva. In addition to this, Huracán no me tumbas (dedicated to the Island) was recorded in Puerto Rico, and they shared voices with one of their idols from the Fania All-Stars, Ismael Miranda. 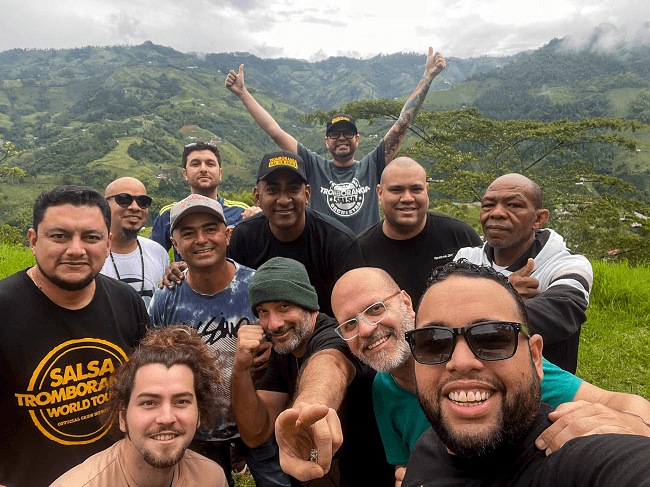 During the pandemic in 2020, Tromboranga http://www.tromboranga.com/en continued with their new record production Salsa Terapia. Melodies such as El cuero del tambor, Devuélveme mis discos, Pachanguera y El mundo al revés are part of this album that has gone viral in choreographies on social networks in addition to being reproduced as multimedia content by Latin radio stations around the world.

“Our success is the dedication and love in selecting the songs, most of them are my authorship, I carry out the general production and the concept of each album”, said the Venezuelan musician Joaquín Arteaga (Director of the orchestra and known for his extensive career as a percussionist and Timbales expert).

In 2021, this Salsa Dura orchestra released the single “Baila Africa” ​​sharing with African artists such as Msaki (voice of the promotional theme) while they toured South Africa (2020). The authorship of this salsa melody was in charge of the leader of Tromboranga, Joaquín Arteaga.

Telling a little about their history, the orchestra made up of ten Latin and European musicians released their first studio album in April 2012 titled Salsa Dura, rated among the top ten of that year by DJs, dancers, and specialized bloggers of the genre.

The stellar and Sabrosa Salsa reunion will be from May to September.