Here we have Miranda and Feliciano

Good afternoon, we have here Earl Miranda, musical director of the Latin Rhythm Boys, and Ric Feliciano, writer and arranger for the group. Nice to meet you guys. It’s a pleasure to have you here. 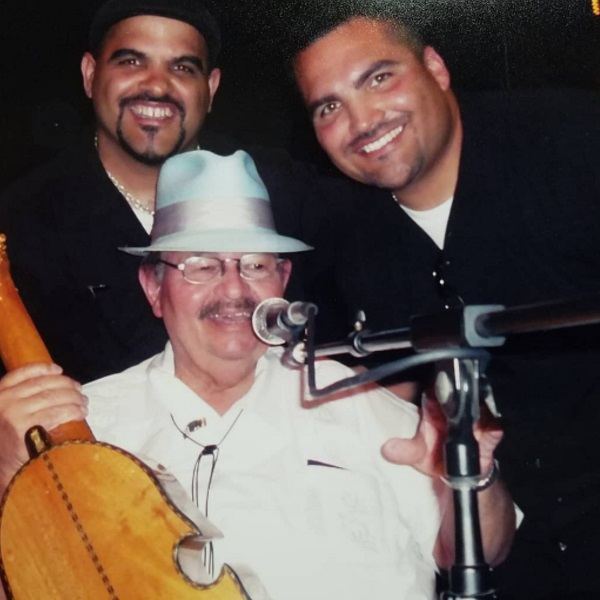 Okay, wonderful. This project began with your father, Mr. Miranda, who was at the head of the group. What did you and your brother Henry learn the most from your father? How did you develop a love for music?

This all started when we were just kids. We had a lot of family celebrations like Christmas and my father’s band always came and play until three or four o’clock in the morning. My mother made food. Music was always very important to all of us from the beginning. When my father died in 1969, my brother started playing for some bands and I started working as a DJ until it got to the point where we got together and decided to start this whole project together.

Around 2003 or 2004, we contacted our cousin Ric Feliciano to ask him to join us. We started to develop a new salsa style. Ric came with the salsa flavor, while we had the jíbaro flavor, so we brought those two things together to start making music.

Mr. Feliciano, do you have anything to add?

Yes, I am a Boricua from New York, that is to say, a Nuyorican as people say here. Back in the 80’s and 90’s, I grew up listening to the music of Hector Lavoe, Mon Miranda, Willie Colón, among others. I am a trombonist and also like trombanga, which is the music of Mon Rivera and Willie Colón which involves placing trombones at the front of the group so that the sounds are very heavy. That is the style of the Latin Rhythm Boys, which seeks to look to the future, but honoring the stars of yesterday. Since we have three or four trombones and a very particular singing style, many people say we sound like La Fania, including Hector Lavoe’s timbalero, who tells us that our style reminds him a lot of the 70’s and 80’s.

When I listen to your music, it sounds a lot like old school salsa. Why choose that specific style?

For me, that style represents the story of which we come from. My family and his father come from Puerto Rico and moved to Hawaii. In 1963, my father made his life in the United States, California, but he actually started his band in 1957, which was called Junior Miranda and The Latin Rhythm Boys. Then, my brother called it The Latin Rhythm Boys Orchestra.

We have added certain elements to make our music more modern, but many of the arrangements are typical of old school salsa. 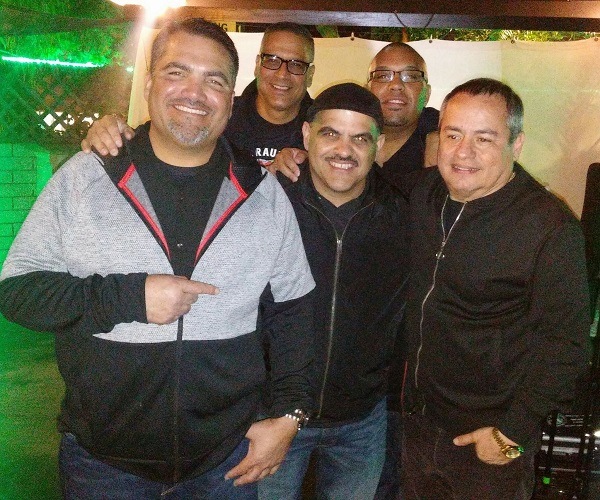 Earl Miranda, Henry Miranda and other members of the band

How Earl, Henry, and Ric work together

Mr. Miranda, you are the musical director of the Latin Rhythm Boys and your brother Henry is the music producer. How do you work together?

(Mr. Feliciano answers the question) Well, I’m the arranger, so what we do is Earl and I write all our lyrics together. My family comes from a long line of jíbaros, but we also love salsa. That’s why we are what we are today.

(Earl Miranda’s answer) We are a great team because I have a lot of ideas and Ric applies them in a phenomenal way. Things work out even better than when I thought of them.

We’ve been invited to awards shows and films to make soundtracks in Hollywood. We’ve done some jingles for certain Hollywood and Netflix films.

Mr. Miranda, you said in an interview that jibaro is more like heart and soul, what did you feel when you listened to jibaro music as a child? Why is jibaro music so important to you?

This taste for jibaro music started when I was a child. This reminds me of when I was with my family, my uncles, my aunts, my cousins and other members. It is in my soul. However, we knew we had to evolve into something more relevant. That’s how we created the group and decided to mix new with old. We look to the future, but honor the past.

There are many family members in the orchestra. Would you say this is a family project?

I would say that myself, Henry, Ric and Ricky Castillo are part of the same family. Certainly, there are many members of the family, but many things change over time and members get older, so they withdraw from group. There are also many members who are not family, but they become family and become very necessary for the band. 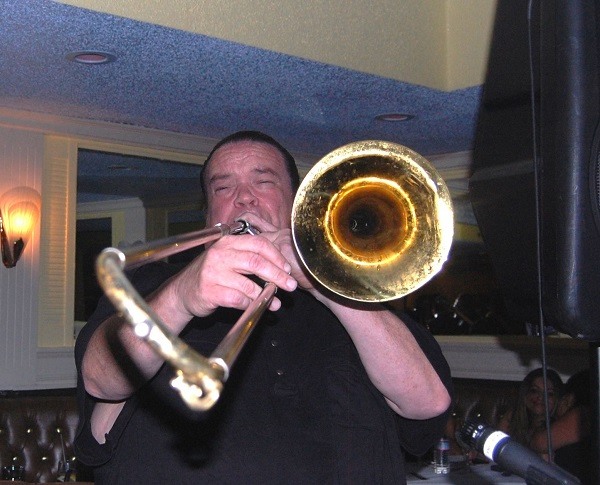 This question is for Mr. Feliciano. I understand that you joined the orchestra in 2003. How did you join the Latin Rhythm Boys?

I came to California in the 90’s and was part of a few bands here, but I was looking for something that might take me back to my roots. That’s when I heard about the Latin Rhythm Boys (laughs) and decided it was a project I could work on. It brought me get back to my family roots, but we also achieved a new sound.

Music is very important to the family. You have always listened to Jíbara and Puerto Rican music. Would you say that education and training is important for musicians?

Yes and no. Musical training is important on the one hand, but on the other hand I think that music just flows. For example, I’m not very good at reading music, but it’s here in my heart. I could perceive it, even if I don’t have a lot of training around it. I think that’s part of the beauty of it all. Well, Ric is a teacher, so he can offer you another view on this subject.

(This is Mr. Ric Feliciano) Indeed, I am a teacher and I’ve been teaching music for over 30 years, but I must tell you something. Education is not enough to be a good musician because there is a connection that cannot be taught through a class. I’ve had many students who do everything right in technical terms, but they don’t have the necessary flavor. Not everybody has that. I think there needs to be a balance between feeling, flavor and education. 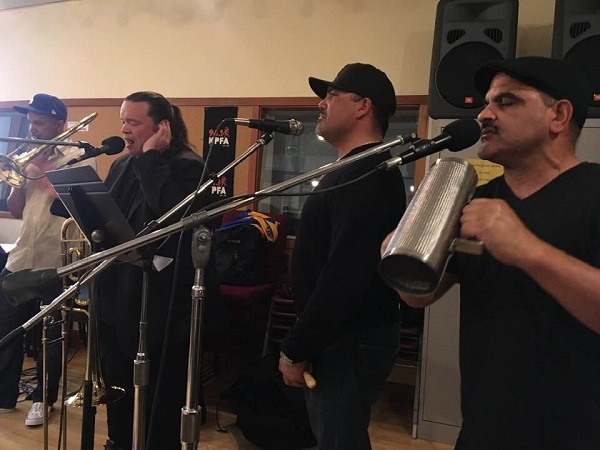 Do you have to be Latino to have that flavor?

We have some guys in the band who aren’t Latino, but they get the swing. We can work with anyone regardless of their ancestry, as we’ve had Americans and Europeans who have everything we’re looking for. We give them the sounds and they have no choice but to imitate them (laughs).

Do you consider it more important to make original music than to do covers?

Absolutely. If you have the talent and vision in your head, everything flows. I think if a person has a song in his/her head, he/she is going to want to translate into reality that idea and play it for an audience to see its reaction. If the reaction is good, you think you’ve done something right.

(This is Mr. Feliciano) What we usually do is to play our own songs at 90 per cent and covers at 10 per cent to please the audience. In fact, many people ask us for certain songs that they think they’re not ours, when, in reality, they are our hits from many years ago. 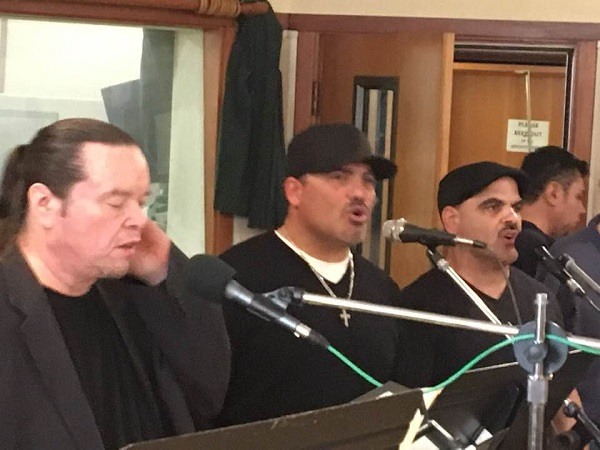