Here you have our interesting comversation

We are here with Uruguayan bandleader, multi-instrumentalist, and percussionist Edgardo Cambón, who currently lives in Oakland. It’s very nice to meet you, Mr. Cambón. What a pleasure to have you with us today.

Hello, Karina. It’s a pleasure to have you here too despite the distance. I also send my regards to the followers of salsagoogle.com and to salsa fans around the world because this is an international connection. Thank you for the opportunity to connect with so many people. 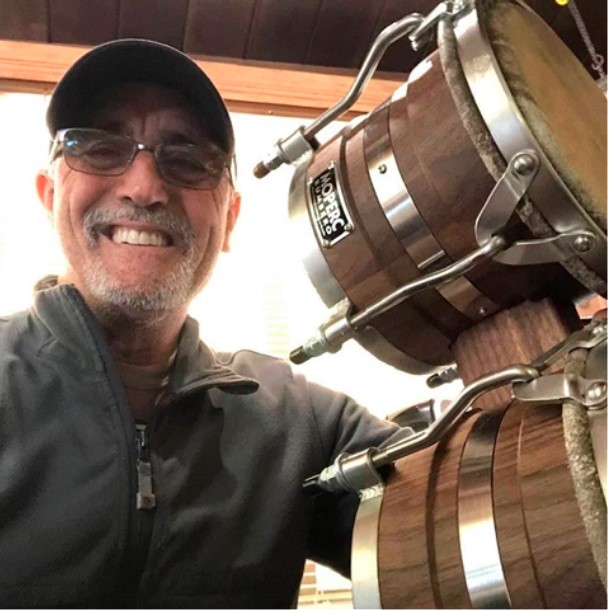 On one of your Facebook pages, one can read that the conga is your main instrument, but you also play many others. In that sense, is the conga the instrument you most enjoy playing or are there others?

That’s a very good question. I am a percussion lover in general and, being Uruguayan, I also came into Brazilian percussion. The instrument to which I always gravitated around and returned to very strongly was the tumbadora or conga (commercial name). To study that instrument and the batá (the most religious Afro-Cuban music) I went five times to Cuba from 1989 to 2006. I have a very deep connection with Cuba and with all the countries in which the tumbadora is used. This is also the instrument I play while singing, which makes me have a very special connection with it. Jokingly, I say that I feel naked if I don’t play something while singing. I always try to play a güiro, maracas or another instrument because I always have.

You also teach music and percussion. It is well known that the teacher teaches students, but also that tstudents can also teach the teacher. Could you tell us what you have learned from your students?

That’s a very important and lovely question. I could tell you many things. The first thing you learn is to be patient with yourself and your own progress because the musician never stops progressing. The human being never stops progressing. When I see a student who is very nervous and isn’t patient with himself, I always try to make him understand that performing one instrument well takes a long time.

I learn a lot about what to do and what not to do. I learn to be patient with them, to rewind the cassettetape and to get back to the basics of what I learned in Cuba when I started traveling. My students also teach me to be grateful to my own teachers and connect with the instruments. When you reach a certain level, you become overconfident and it’s harder to connect with the instruments. Classes force you to pick up an instrument without being obliged to do so, which the professional musician tends to leave out after a long career.

My students remind me of what I was doing when I was learning and force me to keep practicing despite the experience. I always learn from them. 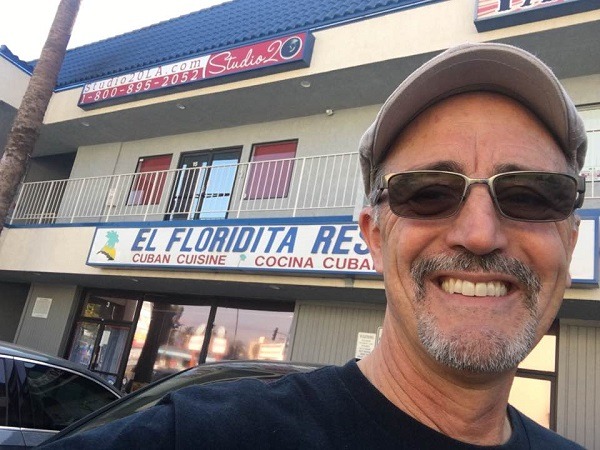 You teach both in person and via Zoom. What teaching strategies do you implement at home?

The difference between one mode and the other is huge and it was hard to get used to this situation. I was receiving a lot of proposals to teach via Zoom before the pandemic. I was avoiding at all costs the use of digital platforms even though many people were interested. I have a lot of online videos with great success and positive feedback, thank goodness. This has caused many people to ask me if I can teach them on Zoom.

The pandemic forced me to build that dormant muscle, so I think I achieved a very good system for giving online classes. In person, I use some applications that allow me to play certain songs I can slow down. These apps can work like a metronome, but funnier. Some of them are Percussion Tutor, Salsa Rhythm, Amazing, Slow Downer, among others.

In the case of Zoom, I suggest my students download these apps on devices other than the one they are using to meet with me. The biggest problem with digital teaching platforms is the delay sound between the student and the teacher. Now, amazing things have been done like the fact that a symphony can play in one country, while the conductor is in another conducting them. There have been improvements.

It may also be the case that there are students with excellent quality equipment, but others who have devices with outdated operating system and low download speed. So, we have to find a way for everyone to learn as well as possible. This system consists of doing a demonstration first, getting the student to play the rhythm from his side through the metronome or the application. Many times, we can spend a whole class trying to solve technical issues, but once everything is solved, you can establish a rhythmic relationship between the student and the teacher.

There are situations in which the mismatch between the sound and image prevents errors from being corrected, so we use phone calls to counter these issues effectively. This is how I look at the video image of the student (if there are no delays) and hear the sound at the right time.

The good news is that I can have students from around the world and doors are opened me for an broad international spectrum that I never expected. 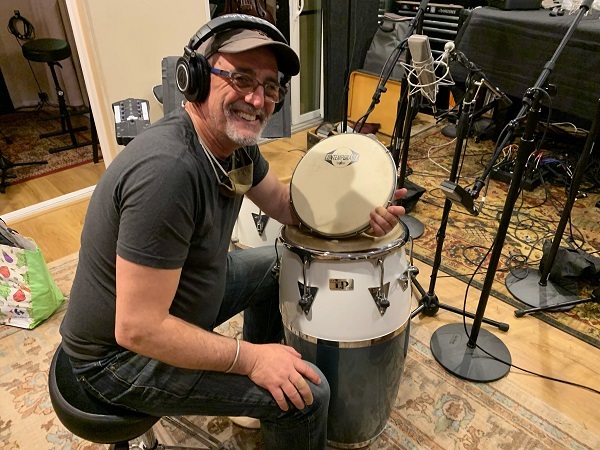 Edgardo Cambón with a Pandeiro in a studio

Radically shifting the issue, according to your website, one of the main defining things about Edgardo & Candela is that you know how to read the crowd very well and what the audience wants at that moment. How do you do that? What techniques do you use?

That’s a very good question. That’s a technique which is a bit instinctive. I must confess that that technique does not belong to the full orchestra, but to me as the lead singer and the orchestra leader. The guys know that I ask for a set list and even send it in advance. Several of them have their iPads and the music there in digital format, but others don’t.

I have over 240 songs in the repertoire, but I don’t get them all with me. On average, you play about seven songs in each set for an hour, which means that you’re thinking of 14 to 16 songs for two hours. It also depends on how long each song lasts.

If you’re playing to an American audience, you’ll probably have to slow down, play one or two songs in English and light beats such as cha cha chá. You have to include digestible things if you’re not playing to a salsa audience.

If I’m playing for the Mexican community, I have to include cumbia and medleys of local bands and artists like Maná, which is a very important Mexican group.

I have four original score albums. The first one was called ilusiones and released on vinyl in 1989. We produced it here in the Bay Area when there were few groups making original music around here. Following a trip to Cuba the same year, I decided to go back and focus more on my melodies, my songs and my lyrics. Another thing I wanted was to keep the Uruguayan essence in salsa and add a bit of candombe, which is the Afro-Uruguayan rhythm par excellence. 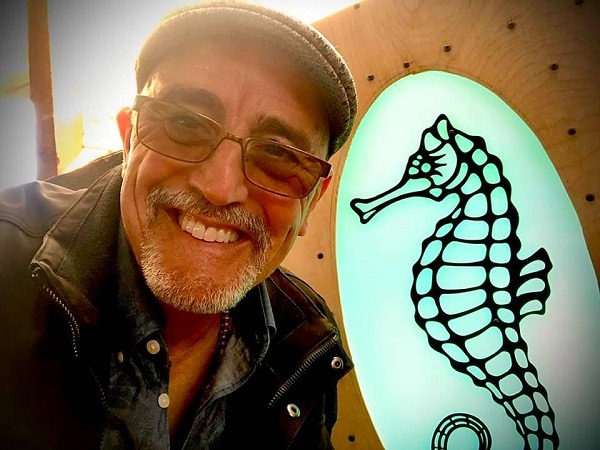 Edgardo and Candela at The Seahorse

I’ve had a lot of popular songs on certain digital platforms, but I wouldn’t be honest to say that I had a big hit like Llorarás by Oscar D’ León and Yo no sé mañana by Luis Henrique. I can use these things to push my original music a bit harder in general. You can have your original music, but you also have to play music known by the public to accustom people to your style and make them learn to digest your thing a little bit.

In the 70’s in New York, the bands only played original music, but those times has disappeared. That’s why I mix original music with familiar music, but I focus on making the result digestible and danceable for people. I play at least four times a week and, if I want to maintain that rhythm of work, I need a repertoire that includes Cuban, Colombian, Venezuelan, Mexican, Dominican music, among others.

What made you get involved in Charley’s project?

No self-respecting musician can allow his career to revolve around two or three clubs because these venues can open and break.

What I liked most about Charley’s was its proposal so similar to that of the 80’s, the decade when I arrived here. They were more stable clubs that had organization and the collective participation of artists such as DJ’s, dance instructors, radio folks, among others.

Also, Charley’s is a nice place and has a size that I think appropriate. When clubs get too big, there comes a point when the vibes can get cold, something that doesn’t happen in this place due to its moderate size.

The only downside is that gas is $6.25 and it’s far away for people from San Francisco, but people from closer areas can go.

Your music reaches audiences from all over the world. Have you had the chance to play abroad?

Yes. In 1996, we were at the Benny Moré Festival in Cuba. A few years later, we were on the island of Guam on the occasion of 5 de Mayo sponsored by Budweiser.

On both occasions we were very well received by the audience.

Most recently in May this year, we just played a large concert with over 1500 people at the Fairmont Orchid Hotel in Kona, Island of Hawaii. On that occasion, everything was arranged by the Salesforce company.

This last work was impressive because of the high technical and professional level of the entire production, since in addition to our Latin music, the popular pop singer Kathy Perry closed the show…

International jobs, and simply out your city, give another angle to the career encouraging the musician to present his original music.

After playing in Cuba, Guam and Hawaii, I jokingly say that I only get booked to play on Islands (chuckles).

Traveling on my own (without the orchestra) gave the pleasure of performing in Sweden and Argentina with the support of local musicians from those countries. 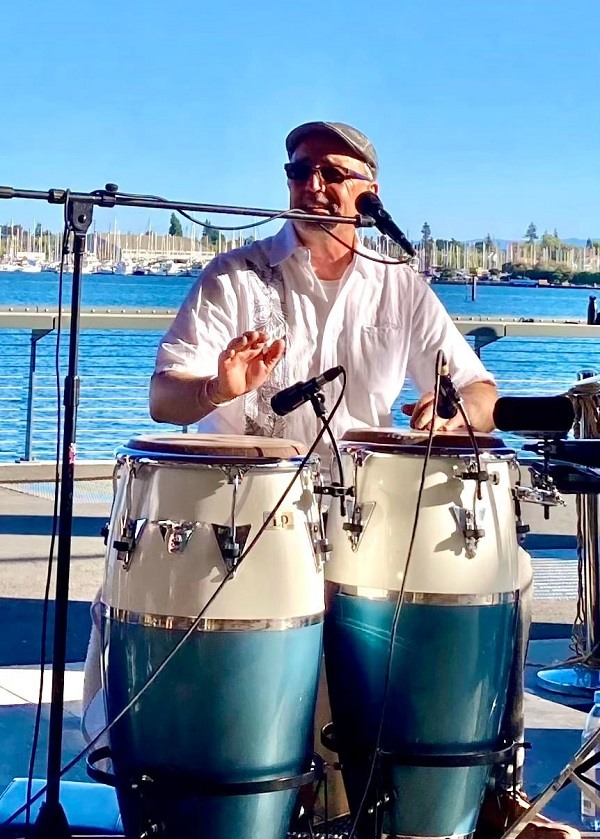 Cambón at Brooklyn Basin in Oakland